Battery cell manufacturers across Europe are planning to scale up their production due to the anticipated increase in electric vehicle sales. The UK is also in the same position. Companies like AMTE Power are looking to use simulation tools to help them explore and anticipate future production challenges. In the AcouBat project, HSSMI have been working together with JW Froehlich and UCL to develop a simulation to integrate the acoustic battery testing method, developed by UCL, onto AMTE Power’s production line and, more generally, to address AMTE Power’s productivity and upscaling ambitions.

At the moment, AMTE Power has a facility in Thurso, Scotland, but is looking to establish a Gigafactory in the near future, which would be able to accommodate the increased demand for batteries as more electric vehicles fill our streets. As the new AMTE Power facility is currently at concept level, HSSMI’s simulation model envisioned a balanced 2GWh cell manufacturing line.

The key focus of the AcouBat project was on validating the introduction of UCL’s newly developed acoustic battery testing processes, for high volume manufacturing within the facility. The project envisioned virtual testing in a simulation developed by HSSMI, as well as in-person testing at the AMTE Power facility in Thurso. The overall objective was to analyse what impact the acoustic testing method would have on production, whether any bottlenecks would be created as a result, and in which stage of battery manufacture it would be most beneficial to conduct the testing.

As part of the project, UCL observed the acoustic testing method at AMTE’s facility in Thurso. The objective of those tests was to validate the acoustic testing in different, real-life production stages such as pre-filling, after cell formation etc. This is something that UCL has not been able to do until now. Previous testing was conducted at laboratory scale and with fully finished cells rather than ones being manufactured.

The simulation tested similar criteria as were set out for the real-life tests.  As scaling up the production of a cell manufacturing facility requires a lot of planning and investment, the simulation also enabled AMTE Power to tweak variables and explore the optimal factory layout, resource and personnel requirements, process development, and the costs involved.

With this information, HSSMI was able to develop an AnyLogic simulation model, which was aligned to a facility layout created by HSSMI specifically for the project. The simulation produced a range of production analysis data, which assisted AMTE Power in optimising operator requirements, shift patterns, cycle times, number of machines, and contained multiple parameters for AMTE Power to adjust to run further experiments.

Meetings with the partners were particularly important, as the specific data they provided was crucial to the development of the simulation to create an accurate model. Regular reviews were carried out with all the consortium members to ensure accurate results were achieved. 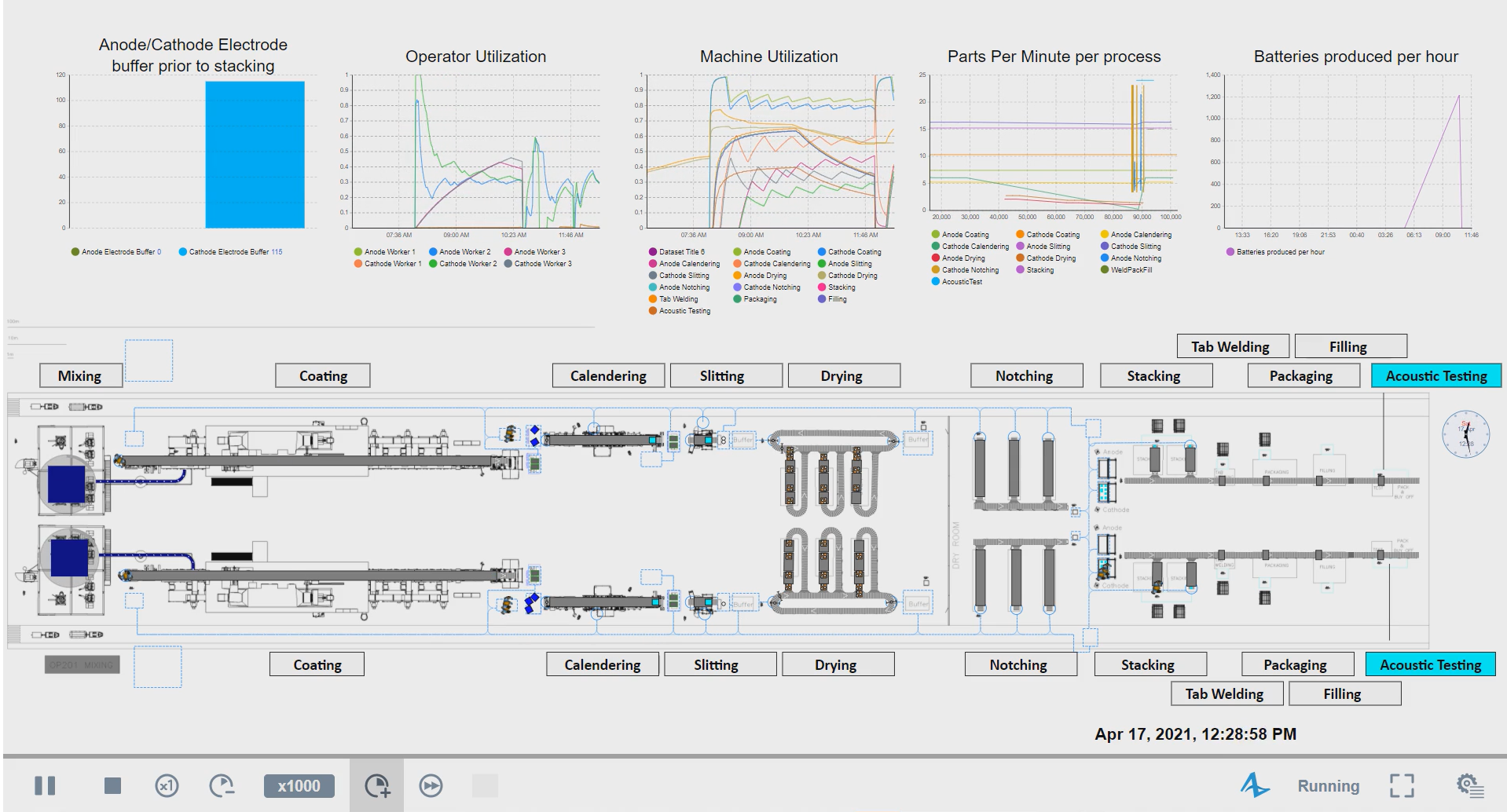 Initial results of the simulation determined the operator, machine, and material requirements of a 2GWh facility, and illustrated the effect that each variable had on the product output. The simulation highlighted potential bottlenecks in the process and provided data-driven insights in order to achieve maximum efficiency.

HSSMI was able to obtain an optimal number of operators and machines per process, machine loading information and correct shift pattern selection.

Based on JW Froehlich’s high-volume testing equipment design, the simulation successfully validated the placement and implementation of the acoustic testing process within the facility and demonstrated that the acoustic testing method would not create bottlenecks in the production line. The design, based on a prototype machine built by JW Froehlich, envisioned a conveyor belt system with an estimated cycle time of 5 seconds per cell.

The live trials of the acoustic testing solution successfully demonstrated implementation with completed cells from the cell assembly process. This presents a strong case as an end-of-line quality check before releasing cells to the lengthy and expensive formation, aging and testing stage. UCL is working to understand the suitability of using the test in other locations of the production line, to complement and replace existing test procedures.

Find out more and download the PDF version of the AcouBat case study here.

Industrial Ergonomic and Assembly Analysis with Optimisation for CNH Industrial

Building a Simulation of the Novel Gallium Recovery Process

HySMART Building a Simulation of the Novel Gallium Recovery Process
Scroll to top HSSMI
We use cookies on our website to give you the most relevant experience by remembering your preferences and repeat visits. By clicking “Accept”, you consent to the use of ALL the cookies. However you may visit Cookie Settings to provide a controlled consent.

This website uses cookies to improve your experience while you navigate through the website. Out of these, the cookies that are categorized as necessary are stored on your browser as they are essential for the working of basic functionalities of the website. We also use third-party cookies that help us analyze and understand how you use this website. These cookies will be stored in your browser only with your consent. You also have the option to opt-out of these cookies. But opting out of some of these cookies may affect your browsing experience.
Necessary Always Enabled

Analytical cookies are used to understand how visitors interact with the website. These cookies help provide information on metrics the number of visitors, bounce rate, traffic source, etc.

Advertisement cookies are used to provide visitors with relevant ads and marketing campaigns. These cookies track visitors across websites and collect information to provide customized ads.

Other uncategorized cookies are those that are being analyzed and have not been classified into a category as yet.